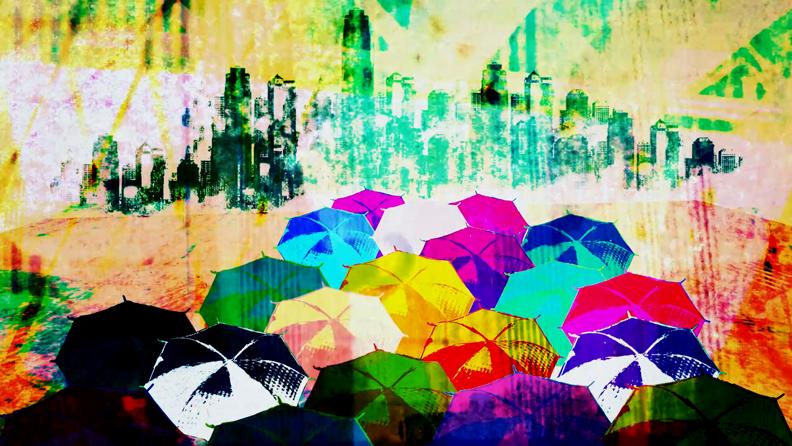 Fisher writes this about his films:

I love when creative work expresses layers of open ended themes. Maybe it means this and maybe it means that. Or both. Or something else. Or maybe nothing at all.

“Electric Sermon” started with an idea of creating a short film that was simply a sermon from an old time preacher, but I thought it should be very modern somehow, and that it needed to speak about a digital age when we worship silicon and electricity (and communicate our ideas through these things). It made sense that the congregation shouldn’t be people, but part of the electric grid.

The power preacher is to me both frightening and comedic, wise and foolish. Is he a tyrant controlling a mass audience or does he really believe what he preaches?

I shot the original footage for “Reign of the Umbrella Men” three years before the film finally took shape. I had this notion of a sad umbrella man in my head but wasn’t quite sure why he was sad or why there seemed to be a disquieting feeling underneath the idea until the opening line hit me one day “good morning and welcome and here we are again” and I realized it was not one, but countless umbrella men waking to the day, marching into their fate, day in and out, climbing, climbing to nowhere, and one sad umbrella man desperately trying to stop them, to get them to hear him. His message is lost to a faltering megaphone and he calmly accepts his fate. This film is interwoven with, again, mixed messages and ambiguous meanings. The umbrella men on one hand live with a singular purpose, under one umbrella so to speak. Yet this is a world of constantly shifting color and texture. Is it as singular as the sad umbrella man thinks? Is it a social machine moving so fast that there is no time to think of the danger that lies ahead? Is he any different, standing at a podium, trying to control the masses?

In addition, we will be exhibiting the art of Kim Piotrowski in various locations throughout the farm.

Please rsvp and join us on Sunday, October 13th from 2-5pm for art and conversation along with a tour of the farm. Bray Grove Farm is located 70 miles southwest of Chicago in Grundy County. To confirm your attendance and receive directions and parking information, email.

Eric Scott Fisher studied film at Columbia College in Chicago. He has worked as a freelance film maker, animator, children’s book illustrator and designer since 2001. In addition to his creative work, Eric is the Executive Director of a nonprofit social services agency in Grundy County.