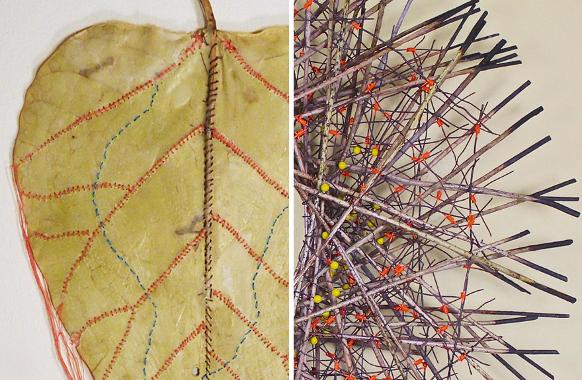 Open Thursdays 2-4pm and by appointment

Cultivator is pleased to present Tatjana Jovancevic and Bill McBride in a two-person exhibition, Glean. They will be showing sculpture, drawings, and documentation of site specific art in our Chicago exhibition space.

Both artists source much of their inspiration and materials from the land; Jovancevic from her hikes along Chicago's lakefront and the area nature preserves, McBride, as a naturalist and preservationist in the Flint Hills of Kansas.Jovancevic's delicate sewn leaves will be accompanied by drawings influenced by her latest residency in Colorado, along with a wrapped wood sculpture. McBride's sculptures, comprised of elements procured from his surroundings, such as hedge branches, sunflower stems, stone, and fence wire, reflect the gentle contours of the prairie and the lush colors of the land. In addition, each artist will show photographs of their site specific outdoor installations.

Tatjana Jovancevic was born in Bosnia and Herzegovina, one of the republics in former Yugoslavia. She came to the United States in 1991 as an exchange student. While she was here the war broke out in her homeland, and she ended up staying to finish her schooling. She currently resides in Chicago.

Tatjana earned a BFA from Northern Illinois University. Her work spans site-specific interventions, works on paper and fiber projects. Tatjana's art is influenced by the effects of being an individual from a war-torn country, as well as by her inner reflection and examination. She has exhibited locally in group shows including Woman Made Gallery, Portage ARTspace, Calvin College, Olivet Nazarene University and internationally at Royal Scottish Academy. Her exhibition with Cultivator is her second two-person show.

Bill McBride is a sculptor and naturalist living in Matfield Green, in the heart of the Flint Hills of Kansas. He works with natural and man-made materials found in the tall grass prairie. His sculpture expresses a cosmological view that humans are one with nature.

In 2005, after living in Chicago for thirty years, he and his wife Julia Fabris McBride, moved to Kansas in pursuit of Bill’s dream of being a sculptor in the prairie. In Chicago he was an architect and co-founder of Riverbank Neighbors, a successful grassroots effort to restore native habitat and welcome people to the banks of the Chicago River.